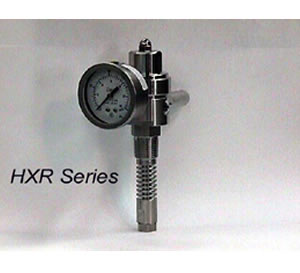 The HXR Series Insitu pressure regulator was designed to offset the Joules-Thompson temperature effect. This effect is the cooling that occurs during a pressure drop as a gas passes through an orifice. With the HXR Series, the cooling is offset by placing the pressure regulating orifice at the tip of the probe assembly in the process line. As a result, the pressure reduced sample gas passes through a section of the probe that has heat exchange fins. As the cooled sample gas flows through this section of the probe assembly, it is reheated by heat picked up from the warmer high pressure process gas flowing around the outside of the probe assembly, thus returning the sample to the original process line working temperature and also preventing the condensation of liquids in the sample.